The price of oil threatens to make new 2021 highs

Oil price trades above $72, and the price action remains bullish. General Dynamics is to benefit from the U.S-U.K.-Australia deal while AMD aims to make ARM-based chips.

The trading week was dominated by inflation data in the United States, United Kingdom, Canada, and the Eurozone. The oil price has a lot to do with inflation numbers, and it is back at the highs, trading above $72. Moreover, the price action remains bullish, and the technical picture suggests an attempt at the 2021 highs should not be discounted.

It looks like, this week, financial market participants just waited for time to pass until the all-important Federal Reserve meeting next Wednesday. In the currency market, the range is obvious, with every single move being reversed the next day. For example, the USD/JPY pair dropped 100 pips this week only to recover the losses and reverse the move on the lack of news.

Such price action is driven mainly by directionless equity markets. Stock markets in the developed economies consolidate close to their highs, and the lack of activity transpires to other markets.

In the United States, the Dow Jones traded with a bearish tone all week but somehow managed to bounce from lows every day. The 35,000 level seems to be pivotal as downside pressure mounts on the cross to the downside, while any upside move attracts new buyers.

In Europe, the stock market traded just like the main American indices did – directionless. The German Dax index keeps its bullish bias, seen at 15,730 points at the time of writing. It prepares for the increase in the number of its constituents, a move seen bullish by many market participants.

The FTSE 100 index remains attracted by the 7,000 level. Nothing seems to move the U.K. market as the consolidations around the pivotal level continues.

On the commodities front, energies continue their march higher. Natural gas eased off a bit after a tremendous bullish run.

Gold and silver dropped this week. Gold, in particular, remains weak, unable to hold above $1,800. A new attempt to break support seen at $1,700 should not be ruled out.  Silver dropped below previous support at $22.92 on a strong dollar. The U.S. Dollar index moved closer to the 93 level, fueled by better than expected retail sales data.

Retail sales data in the United Kingdom is already out today, and it surprised the market participants negatively. On expectations of 0.5%, the actual data showed a decline by -0.9% this month. Later in the trading day, the inflation data in the Eurozone may move European markets. The market expects the final CPI to reach 3%, well above the European Central Bank target.

Retail sales in the United States acted as a positive surprise, though. The market expected U.S. consumer spending to decline in August, but the opposite happened – spending rose. As such, Goldman Sachs quickly upgraded the American GDP forecast for the second half of the year. The divergence between the U.S. and other advanced economies continues, as suggested by the larger monetary and fiscal stimulus delivered during the COVID-19 pandemic.

The last important piece of economic data today is the Preliminary University of Michigan Consumer Sentiment. The market expects it to rise from 70.3 to 71.9. However, if we consider yesterday’s retail sales data, the bias is that the actual data will beat the forecast.

Today’s markets to watch are oil, General Dynamics, and AMD. 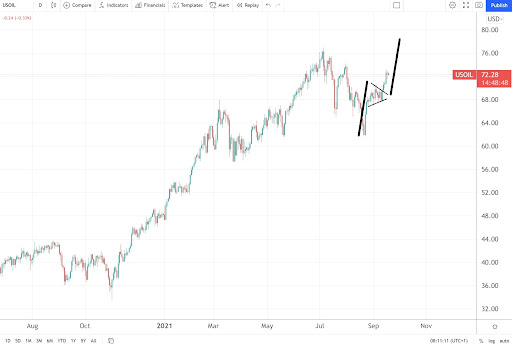 The dominant theme in September was the rise in the price of oil. The price action remains bullish as the technical picture shows a possible pennant formation. After the triangle broke higher, the measured move suggests that the oil price may trade above its 2021 highs. Moreover, the bullish case for the oil price is further supported by the market’s ability to hold the higher highs and higher lows series, a bullish development in any rising market. On the flip side, a move below $68 is bearish. 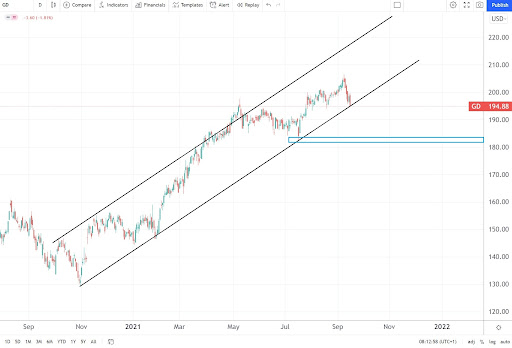 General Dynamics stock price is in focus this week after the U.S., the U.K., and Australia announced the trilateral security pact aimed to counteract China’s growing presence in the region. General Dynamics is one of the companies that will benefit from the deal as one of its segments builds nuclear-powered submarines. The deal, worth $40 billion, created some tectonic shifts in the international arena, as Australia dumped a previously agreed deal with France. Therefore, Europe is left outside, and voices in Paris criticised the move vehemently.

From a technical perspective, General Dynamics stock price is at dynamic support provided by the lower edge of a rising channel. The $200 level remains pivotal for the market, and a drop below $180 turns the bias from bullish to bearish. 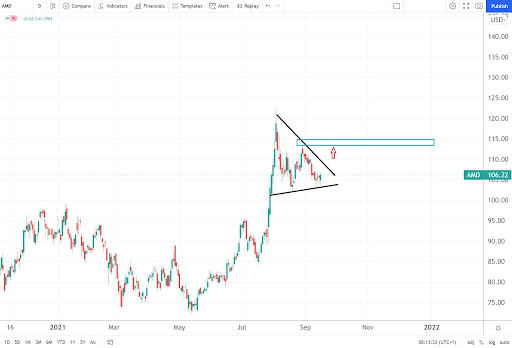 AMD broke above $100 during the summer months, and it has consolidated ever since. The price action resembles a possible pennant formation and a daily close above $115 points to further upside. On the other hand, a drop below $100 invalidates the bullish pattern.

Oil gained the most this week, trading with a bullish bias. Gold was rejected again at $1,800.

Binance is finally getting a headquarter as regulators slam ‘decentralized’ workspaces

FedEx stock price under pressure ahead of the quarterly earnings

FedEx stock price under pressure ahead of the quarterly earnings

How to Build Strong Supply Chain Relationships Amid Economic

Top UK banks no longer too big to fail, says Bank of England

As startup layoffs continue, some perspective

Credit card interest rates are ‘the highest they’ve ever been’: Analyst [Video]