The bearish momentum continues for the price of gold as the yellow metal cannot bounce from its recent lows. The dollar’s strength is to blame as investors prepare for the Federal Reserve meeting. Nike and Lennar release their quarterly earnings this week.

The trading week began with a bearish tone as financial market participants watched what happened with Evergrande, a Chinese company in financial troubles. The property developer is on the verge of collapsing, and the Chinese Government has no intentions of bailing it out, sparking contagion fears for China’s economy and the world.

Gold price continues to decline, now at $1,750. The move lower in the price of gold comes in the context of a strong U.S. dollar as investors prepare for the Federal Reserve meeting scheduled for Wednesday. Natural gas and copper declined at the start of the trading week by more than 1.5%, while the oil price is steady above $71.

European markets are down about 1%, following the lead of the U.S. stock market futures. Investors trade with a cautious tone and watch events unravelling in China. Also, the Dax 30 index became Dax 40, meaning that ten new companies were added. As such, today’s performance will be closely watched by market participants hoping to see a more dynamic German stock market.

Today, there is nothing important scheduled from an economic events perspective. Instead, the things that matter for markets are the news out of China and how the Evergrande situation develops, as well as the Federal Election in Canada. Speaking of elections, next Sunday, euro traders prepare for the most important European political event of the year – the German federal election.

Today’s markets to watch are gold, Nike, and Lennar. 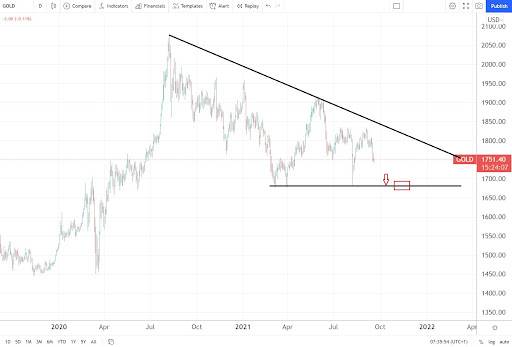 Gold bounced a few times now from below $1,700, and it became clear that this is the area offering strong support. A drop below puts pressure on the gold price because investors will interpret the triangle as a reversal pattern; thus, more weakness lies ahead on such a break. Only a move above $1,900 would flip the bias from bearish to bullish. 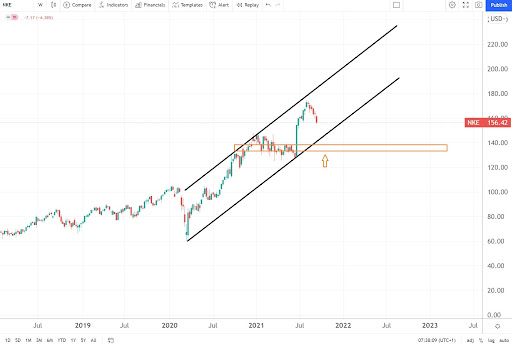 Nike is on a bearish path ahead of this week’s quarterly results. The price should find support at the lower edge of a rising channel and an even stronger one at the $140 area. 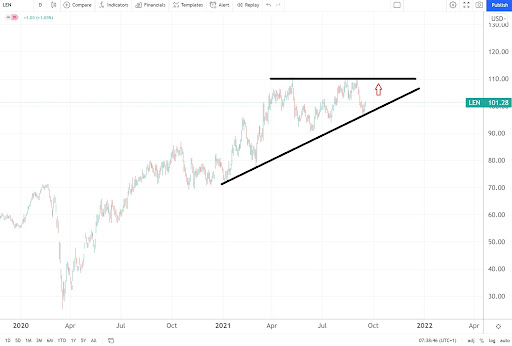 Lennar releases its quarterly earnings today, and the market forms a contracting triangle with horizontal resistance at $110. A daily close above the level would signal further strength, as suggested by the ascending triangle pattern. On the flip side, a daily close below $90 would change the bias from bullish to bearish.

The U.S. dollar starts the week on a strong note; the gold price looks vulnerable.

September is starting to stink for the stock market: Morning Brief

This retailer stands to benefit from Bed Bath & Beyond bankruptcy

US dollar index (DXY) pattern points to a comeback soon

What to expect from software stocks in 2023?

The web3 regulatory landscape in the UAE

Retail Space For Lease: Tips to Make Your Property Stand Out

2
No Result
View All Result