Support in the 4,300 area held, and the S&P 500 index bounced from its lows. Facebook stock price remains under pressure, and JP Morgan investors prepare for the quarterly earnings.

Each year at the start of October, investors remember the crash that occurred some decades ago, and they are worried about repeated history. As such, traditionally, October is a volatile month – and this year is no different. The S&P 500 index moved at least 1% in each of the first three days of the trading month, in a clear sign of investors’ restlessness.

There are plenty of reasons to worry, from the rising energy prices to the debt ceiling in the United States. The debt ceiling has increased 78 times since 1960 – why would this year be different?

Yesterday, the stock market indices in the United States closed higher, ending the day up by about 0.5%. Moreover, futures point to a green opening today, meaning that the positive sentiment will also be dominant in today’s London session.

The WTI crude oil price gave up some of its recent gains, close to $77. Gold trades are close to $1,750 while natural gas is the star of the trading week, up over 30% yesterday alone, only to give up most of those gains on news that Russia is ready to intervene to stabilise the market.

The day ahead is light in terms of economic releases, with only two possible market movers. The ECB Monetary Policy Meeting Accounts are scheduled to be released in the middle of the London session. While no surprises are expected, traders will scrutinize the Governing Council members’ discussions in search of clues regarding future monetary policy moves.

Another is the Ivey PMI release in Canada. The market expects a print of 60.3 for September, much higher than the 50 level that signals economic expansion. 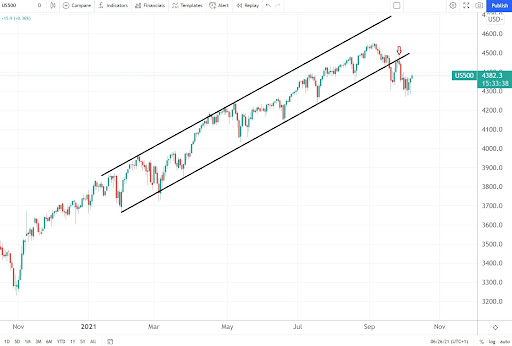 The S&P 500 index remains bullish despite breaking out of a rising channel. The market broke the lower edge of the channel and then retested it before being sold again. However, on its move lower, it failed to break the previous series of higher lows. Thus, the bullish conditions remain in place unless we see a daily close below 4,300. 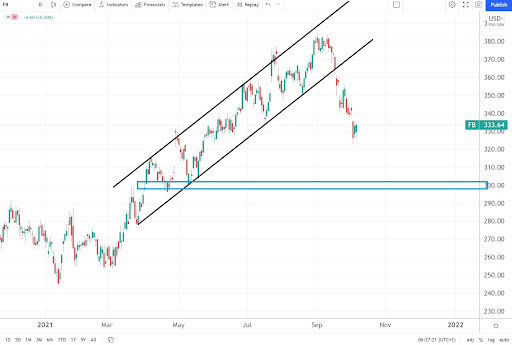 Facebook suffered an outage early in the trading week, and its platforms’ users could not access the company’s apps and services for hours. The stock price reacted by dropping sharply on the day, as investors feared this might not be an isolated event.

But a close look at the technical picture reveals that Facebook is well off its 2021 highs, and the decline started way earlier. With this week’s move, the market broke the series of higher lows, threatening to move to $300, seen as the next level of support. The pressure on the tech sector persists. 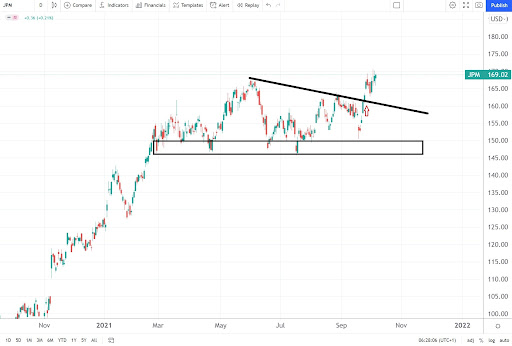 JP Morgan Chase investors prepare for the quarterly earnings scheduled for release next week. The stock price is at highs, breaking out of a bullish triangle that suggests more upside is possible. On the flip side, a daily close below $145 would invalidate the bullish case.

Natural gas is the star performer of the week; the euro remains weak, being sold across the dashboard.

Think of Facebook as a money maker, not a babysitter: Morning Brief

Tilray stock price under pressure ahead of quarterly earnings

Tilray stock price under pressure ahead of quarterly earnings