S&P 500 jumps the most in seven months

The trading week was dominated by a strong comeback in the equity markets, especially starting with Wednesday. The main U.S. indices are back at the highs, threatening with new record levels.

Perhaps the most impressive rally took place on the S&P 500 index. It soared the most in seven months, gaining 1.7% on the back of a lower U.S. dollar and ignoring the upcoming tapering of the asset purchases from the Fed.

The frenzy in the U.S equity markets quickly spread around the major developed markets. The Nikkei 225 in Japan gained more than 1.8% during its last session, triggering another leg lower in the Japanese yen.

Ahead of the last trading day of the week, the U.S. futures point to a green opening, up by about 0.3%. Investors optimism led to the European market indices to open in the green, as seen by the German Dax index that trades close to 15,500 points or the French CAC 40 index, seen up by 0.44% today.

After the inflation data was out on Wednesday, precious metals bounced, as seen by the move higher in the price of gold. However, the yellow metal found stiff resistance at the $1,800 level, unable to surpass it yet.

Oil’s rally continues, as the WTI crude oil price trades well above $80. It reached $82 at the time of writing this article, and it trended higher the entire week. Strong demand from Asia and supplies that do not match the economic needs are responsible for the ongoing rally.

Today the attention turns to retail sales in the United States. The market expects the retail sales to decline by 0.2% after gaining 0.7% in the previous month. Other than that, the economic data to be released today is of secondary importance, and thus the focus remains on the equity markets’ rally and the relentless move higher in the energy markets. 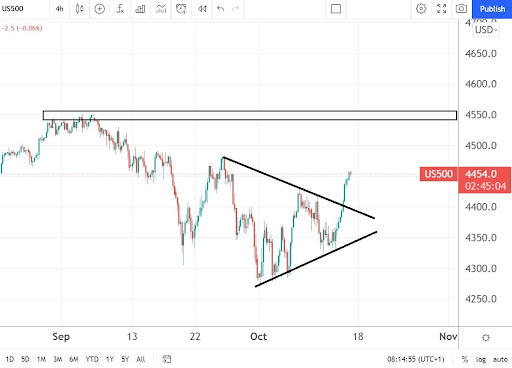 The S&P 500 rally can be attributed to a triangle that acted as a reversal pattern. The market declined almost 200 points from the recent highs, but the move lower was corrective if we judge by the triangle forming at its end. By the time the market broke the upper trendline, the move higher ignited more strength, as investors bought the breakout, hoping that the index would quickly move to new all-time highs.

Indeed, the rally that followed was nothing short of impressive. The index gained more than 1.7% yesterday, its biggest rally in seven months, and the chances are that the rally will continue today, at least if we consider that the VIX index dropped close to 10% yesterday. 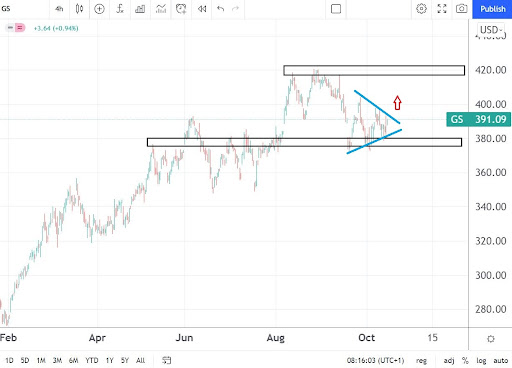 Goldman Sachs investors await the quarterly earnings scheduled to be released today. The price action here resembles the one in the S&P 500 index in the sense that we can spot a similar triangle at the end of a declining trend.

The market found stiff resistance at the $400 level and was rejected on the first attempt to cross higher. It even formed a triple top formation around the $420 level, but the bias remains bullish while the stock price holds above $380. A daily close above $400 should trigger a new attempt at the highs, and the quarterly earnings may be just what bulls want to see. 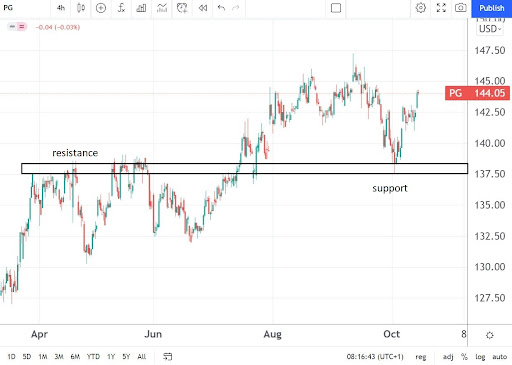 Procter & Gamble investors also prepare for the quarterly earnings, as the company holds the earnings conference call in the first half of next week. The price action is bullish after support in the $137.5 area held. The market keeps forming a series of higher highs and higher lows, pointing to more strengths lying ahead.

The oil prices rallied all week without any pullback. The most impressive thing about the rally in the oil markets is that the prices approach levels considered impossible only a few months ago. As such, a move above $100 for the WTI crude oil price is not improbable anymore. Equities also rallied in the developed world, led by the S&P 500 and the Nikkei 225 indices.

On the flip side, VIX, the volatility index, declined almost by 10% in one day. As usual, when volatility declines, the stock market rallies, so the two moves were correlated. Still, on the weak side, the Japanese yen declined by the most this week, and the U.S. dollar gave back some of its recent gains.

Report On 5G Market in Aviation