Silver price makes new lower lows despite the weakness in the bearish U.S. dollar. Markit and Micron investors prepare for the quarterly earnings.

The last trading day of the week starts with a strong equity market following the Fed’s decision and a weak U.S. dollar. But the dollar weakness is not seen in gold or silver, as the two remain under pressure despite rising inflation and uncertainty in Chinese markets.

China was all over the news this week. During the first days of the trading week, the U.S. and European equity markets reacted to the news that a Chinese property developer, Evergrande, might default on its payment obligations.

As the Asian markets declined, the European and U.S. equity markets reacted as well. Investors sold equities and bought safe-haven currencies, such as the Japanese yen or the Swiss franc. The U.S. dollar also strengthened, as it usually does under such conditions, given that it is the de-facto world’s reserve currency.

It all lasted until the Federal Reserve of the United States delivered its monetary policy decision. Then, despite the FOMC statement, the dot plot, and the press conference being all hawkish, the equity markets reversed the recent losses and started trending higher. So did the U.S. dollar and the safe-haven currencies. In short – the week started with a risk-off sentiment, which turned into a risk-on momentum following the Federal Reserve decision.

Silver and gold prices remain depressed, disconnected from the price action in other markets. The opposite is true for oil and natural gas prices – both in bullish trends and putting pressure on their recent highs.

This was the first trading week with the German Dax index having 40 companies in its composition. Starting with the 20th of September, the German index includes ten more companies, moving from Dax30 to Dax40. It is the biggest ever reform of the emblematic index, and many voices say that the timing is not random, given the German federal election to take place on the 26th of September. In any case, the new Dax traded more or less in the same way as the old one – with a bullish tone, keeping an eye on the recent highs.

Today’s economic calendar has little to offer. Only the Fed Chair, Jerome Powell, may move markets with his remarks at an online event hosted by the central bank. However, given that the Fed’s meeting just ended a couple of days earlier, it is unlikely to hear anything new.

Therefore, today it is just about positioning for the events ahead. Euro traders focus on the German elections and adjust their positions accordingly. Who will be the next Chancellor as Angela Merkel leaves office? Moreover, how long will it take for Europe’s largest economy to form a government?

Elections have often led to gaps in the currency markets, as news over the weekend affects the opening prices next Monday. Could it be the case this time too?

Today’s markets to watch are silver, Micron, and Markit. 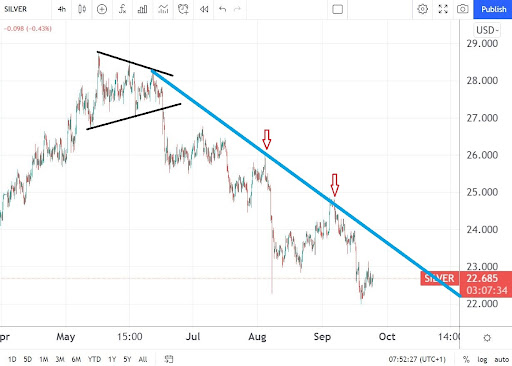 Silver price remains in a bearish market following a triangular pattern that acted as a reversal back in June. Since then, the market has dropped from $28 to $22 and keeps making lower lows. Investors sold every bounce, and as long as the price remains below the falling trendline, the bearish conditions remain in place. Only a daily close above $24 may switch the bias from bearish to bullish. 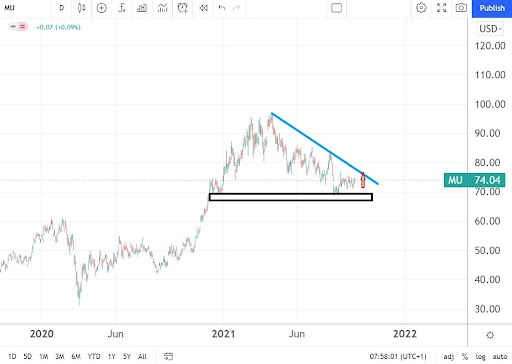 Early next week, Micron reports its quarterly earnings. Investors expect the earnings-per-share to increase by over 100% compared to the same period last year. It would not be unusual, given the shortages in the semiconductors industry and the subsequent rise in prices that helped the chips manufacturers.

Yet, Micron stock price was under pressure and declined over the summer. It has reached support at $70, and a daily close above $80 signals the return of bullish conditions. On the flip side, a daily close below $70 spells further trouble for the stock, as the series of lower lows and lower highs remains intact. 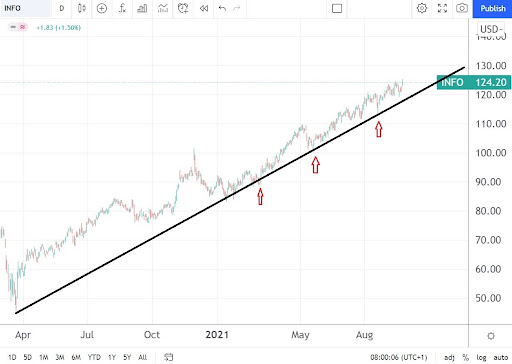 Markit is another company that reports its quarterly earnings next week. In sharp contrast to Micron, Markit has been in a strong bullish trend since April 2020, when the stock market reacted to the COVID-19 pandemic. The story here is simple – as long as the price action remains above the rising trendline, the stock price will keep trying at a new high. Bears may want to sell on a daily close below $110, as it would mean that the higher lows series is broken. But if no such pullback happens, the safest thing to do is simply to stay on the long side and ride the bullish trend.

Oil is the undisputed winner this week. It rose above $73 ahead of the October OPEC meeting, and the conditions remain bullish. Precious metals (i.e., gold, silver) are weak, trading in a bearish market, decoupled from the price action seen in other financial assets.