The trading week started with a blast as OPEC+ agreed to increase its production by 400,000 barrels per day for November. The market expected/hoped that the production would increase much more than the original plan, given the rise in the oil prices and the strong demand. However, the cartel and its friends decided to stick to the original plan of regular monthly increases, and their decision triggered another leg higher in the price of oil.

The oil price has traded with a bid tone for quite some time now. As a result, it diverged from other financial assets and even moved higher while the U.S. dollar gained against its G10 peers. Speaking of the U.S. dollar, the rise in the oil price puts further pressure on inflation, which, in turn, pressures central banks to tighten their monetary policies.

The European stock market indices opened the trading day slightly higher. The German Dax index found support at the 15,000 area, down significantly from its September highs, while the FTSE 100 index struggles to hold above 7,000 points, as it did most of this year. In the United States, the stock market futures are flat, as investors await the ISM Services PMI scheduled for release later today.

The energy crisis continues as natural gas is up another 1.6% today. Together with the rise in the oil price, natural gas’s bullish run puts pressure on Northern hemisphere economies that prepare for the winter season.

Today is the services PMI day in Europe and the United States. Out of all the releases, the one in the United States should matter the most for currency traders as investors will interpret the employment component in the hope of forming an educated guess about the upcoming Non-Farm Payrolls release. The market expects the ISM Services PMI to decline from 61.7 to 59.9 in the previous month. 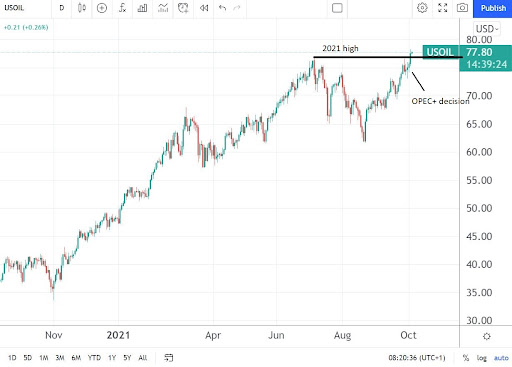 The WTI crude oil price jumped above $77 on OPEC+’s decision, and so it made a new high. Because the series of higher lows also remains intact, the bias remains bullish for the months ahead. Only a drop below $60 would alter the bullish case. 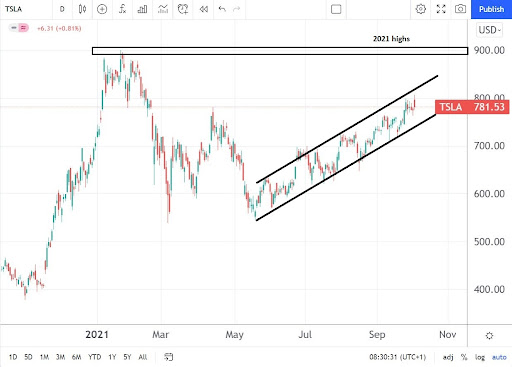 Since June, Tesla’s stock price has moved in a bullish channel and now threatens to climb to a new  2021 high. There always appears to be a reason to buy Tesla, and this time the last leg higher was made on the company’s announcement that it delivered record cars for the quarter. 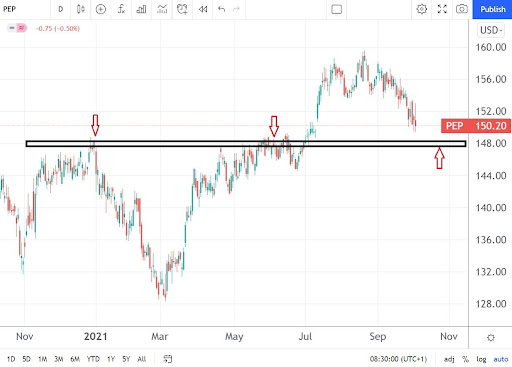 PepsiCo stock price is under pressure ahead of the quarterly earnings scheduled for today. The market heads towards support in the $148 area, and a close below suggests more downside in the months ahead. However, bears should be cautious here as the area acted as resistance in the past, so it may turn out to offer strong support on the stock price’s move lower.

Nexo hit with enforcement actions from 8 US state regulators