Gold price rallies from its September lows as the stock market declines. The new trading month starts with a risk-off sentiment, as safe-haven currencies are in strong demand. AMC investors applaud the company’s decision to buy back debt. SunPower is added to the MidCap 400 index.

The trading week ends, and a new trading month begins today. Investors leave behind a negative month for stocks and terrible for precious metals, but the gold price bounced from its September lows and now looks well bid at the start of the new month.

Precious metals, led by gold, declined in September. They were affected by the rise in the U.S. yields, but that decline came to an abrupt end yesterday. The end of the month flows brought U.S. equities on their knees, and gold bounced from its lows.

Global equity markets ended the trading month lower. In the United States, the S&P 500 is down by 5.1% from the all-time highs. It is the first time in 2021 when the stock market has dropped more than 5%, and it may just signal the start of a more severe correction. Yet, the index is up on the quarter, its sixth positive quarter in a row.

European equity markets are also off to a rough start to the new trading month. As U.S. futures point to a weak opening, the Spanish index is down about -0.70% today, the German Dax index dropped toward 15,100 points, and the CAC 40 in France is down by 0.70%.

The WTI oil price remained bid throughout the previous trading month and week. It trades around $75/barrel and remains bullish while above $70.

The stock market weakness triggered a risk-off move, mostly visible in the currency market. Investors quickly turned their attention to safe-haven currencies, so the Japanese yen and the Swiss franc gained against their peers.

Today is a busy day from an economic data point of view. Also, even though it is the first Friday in the trading month, the Non-Farm Payrolls report is not scheduled until next Friday.

PMIs are released today in the Euro area, the United Kingdom, and the United States. The market expects some decent numbers, well above 55 in all cases. Remember that a PMI release above 50 shows the sector is expanding, meaning investors should expect future economic growth.

Another important piece of data to be released today is the PCE or personal consumption expenditure in the United States. Today, the Core PCE Index is expected at +0.2%, declining from +0.3% previously. This data is important for traders because it represents the Fed’s favourite way of measuring inflation. Yesterday, the Fed Chair talked about inflation and how it expects it to come down eventually, and we will have a clue today if it has already peaked or not.

Finally, the Canadian GDP is expected to shrink by 0.2% month-on-month. A bigger contraction in the previous quarter should increase the volatility in the Canadian pairs.

Today’s markets to watch are gold, AMC, and SunPower. 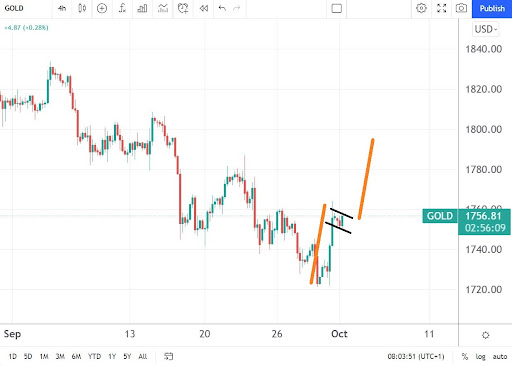 Gold price traded with a bearish tone throughout September. The market kept forming lower lows and lower highs, typical price action during declining prices. Yet, the end of the month flows showed strong demand for the precious metal. Gold bounced from $1,720, where it appears that it has formed a double bottom pattern and now trades above $1,750. Moreover, a possible bullish flag pattern points to more upside, so we should not rule out a move toward $1,800 sooner rather than later. 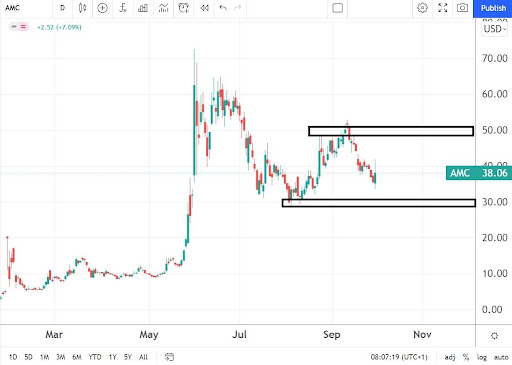 AMC stock price bounced from its recent lows on the news that the company plans to buy back some of its debt. More precisely, management announced that it is buying back $35 million in first-lien debt, a move that propped a spike higher in the AMC stock price. When a company buys back debt, its debt ratios decline, which is a positive, and it signals that it has no concerns regarding future cash flows.

From a technical analysis perspective, AMC stock price remains in a consolidation area between $30 and $50. A break out of this area, regardless of the direction, should trigger more follow-through. 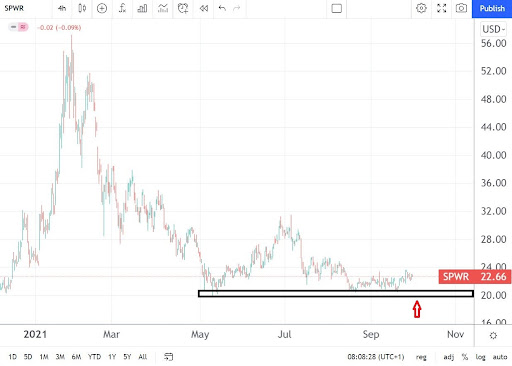 SunPower stock price has suffered a steep decline in 2021. From a high of $56, it fell close to $20, where it found some support. It recently bounced over 8% on news that the company is added to the MidCap 400 index. Also known as the S&P 400, this is the most widely followed mid-cap index.

When a new company is added to a stock market index such as the MidCap 400, it represents a bullish development for the stock price because of passive investing. Passive investors build their portfolios in such a way as to mirror an index. Thus, the inclusion of a new company in an index triggers a bullish market reaction from other participants buying the stock to copy the index’s structure.

The technical picture, however, remains bearish. Only a daily close above $30 would reverse the bearish trend.

Equities are weak, led by Nikkei 225 in Japan, down over 2% in the last trading day. The U.S. dollar and crude oil price are both well bid.

Investing in Crypto with Staking and Savings

Key things to know about Bitcoin (BTC) for the week ahead