FTSE 100 trades above 7,000 points, and the outlook remains bullish as a new trading week begins. The Bank of England’s recent hawkishness is not enough to spoil the bullish momentum.

The new trading week starts with the European equity markets opening in green territory. In the United Kingdom, the FTSE 100 index trades with a bullish tone, despite opening the week almost flat. The index’s bullish momentum is set to continue while trading above 6,800 points.

Germany has been in the news lately because the federal election ended yesterday. The outcome is mixed. Forming a new government may take weeks, if not months. Yet, Germany’s benchmark index, the Dax, started the trading week with a gain of 1% in what seems to be a relief rally.

The U.S. futures are also in the green. At the time of writing this article, the futures market points to a strong start of the trading week, with the Dow Jones index leading the way, seen up by 0.4%.

The oil price rally continues, and so does the bullish momentum behind the natural gas price – the WTI crude oil price is up by 1.29% to start the trading week, while natural gas trades higher by 3.25%. Gold and silver do not share the same bullish conditions, trading in tight ranges.

Today is full of central bankers’ speeches. In Europe, the President of the European Central Bank, Christine Lagarde, is scheduled to testify before the Committee on Economic and Monetary Affairs. The euro is seen weak after the German elections, and Lagarde’s remarks may bring even more volatility to markets.

Later in the day, four Fed members hold speeches on various economic matters. As the blackout period before the previous FOMC meeting ended, the entire week is full of Fed members discussing the economy and guiding financial markets.

Today’s markets to watch are FTSE 100, Cintas, and Micron. 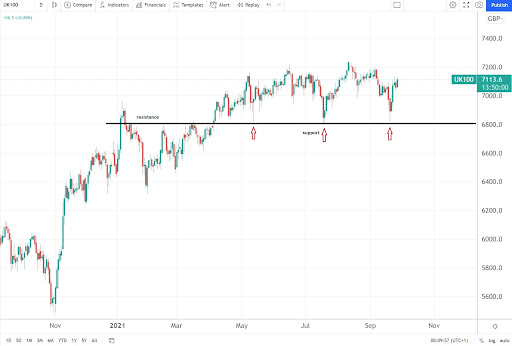 The FTSE 100 index remains supported while above 6,800 points. The market struggled to break resistance at the start of the trading year, and since last May, the resistance has turned into solid support. 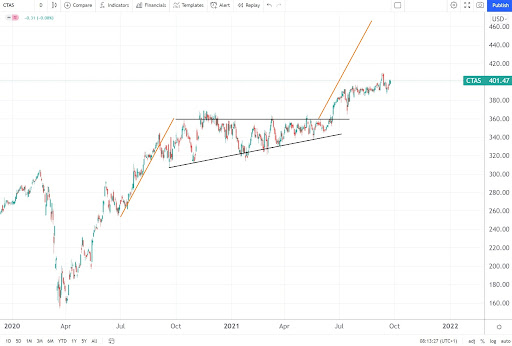 Cintas releases the quarterly earnings this week, and the price action is bullish. The market broke out of an ascending triangle pattern, and the measured move points to further strength. On the flip side, a drop below $360 would invalidate the bullish setup. 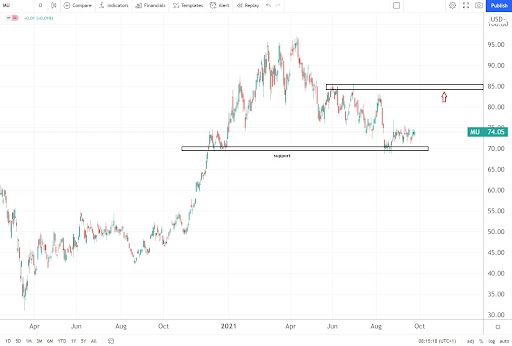 Micron is another company that released its quarterly earnings this week. The price action here is bearish, after the share price forming a triple top at the $95 level during the first half of the year. A drop below $70 should bring even more weaknesses, while the bearish setup gets invalidated if the market reverses back above $85.

Oil and natural gas gain at the start of the trading week; the euro is weak following the German elections.