Dow Jones consolidation continues, unphased by hawkish Fed. Despite the Fed announcing tightening monetary conditions, the stock market shows that the news was priced in.

The main event of the trading week is behind us, as the Federal Reserve of the United States September meeting concluded yesterday. The Fed announced that it would begin tapering the asset purchases this year, and the official announcement will be released at the next meeting.

Dow Jones and the rest of the stock market indices did not react to the Fed’s hawkish message. One might say that the announcement was priced in, which could be the case because the Fed did telegraph its intentions well in advance.

As such, the Dow consolidated above 33,000 points, a five-month-long consolidation. In other words, the stock market looks for direction and, while above 33,000, the Dow Jones outlook remains bullish.

At the start of today’s London session, the stock market futures are well in the positive territory, up to half a percentage point. The resilience made the U.S. dollar reverse most of yesterday’s gains and oil to consolidate above $72.

Speaking of the crude oil price, its resilience is remarkable. Next week, the OPEC meeting might bring some volatility, but the fact that it holds above $70 shows strong momentum is likely to continue.

Gold traders must be frustrated. The yellow metal does not react to anything – neither to the Fed’s message nor to the higher inflation. It simply consolidates below $1,800, unable to make a significant move.

European equity markets had a strong opening– the French CAC40 index is up by 0.74%, while the Spanish IBEX index is up close to 1%. Attention moves to the upcoming German elections, a major political event that may shape the face of Europe for the years ahead.

Two central banks release their monetary policies today – the Swiss National Bank and the Bank of England. Recently, the Swiss franc has been in strong demand due to its safe-haven properties, while the British pound simply follows the risk-on/risk-off market sentiment.

Today’s markets to watch are Dow Jones, BlackBerry, and Facebook. 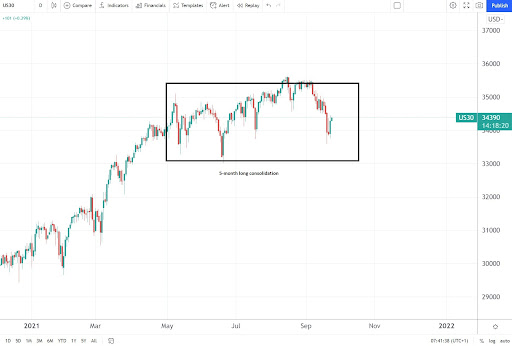 Dow Jones continues its month-long consolidation. It stayed close to its record highs levels and took the Fed’s message regarding the tapering of the asset purchases well. It looks like the market is in a bullish pattern, a continuation one, so the bias remains to the upside as long as the index trades above 33,000 points. 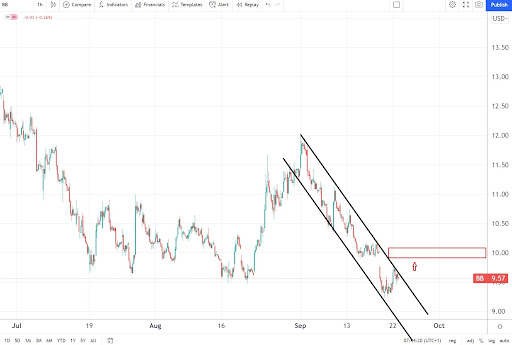 BlackBerry jumped on better than expected earnings. The stock price is up by 2% in pre-market, but it was seen as high as 8% right after the earnings release. The technical picture remains bearish unless the price regains the $10 level. 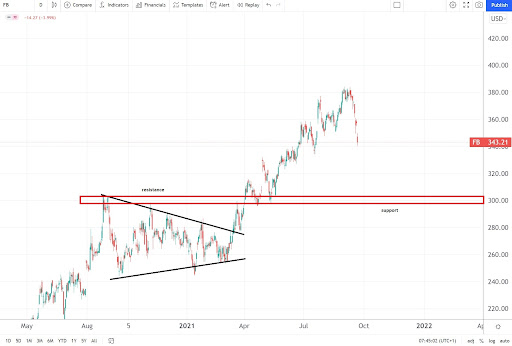 Facebook investors have watched the stock price recently decline by 5%. The negative iOS ad impacts the business, and support is seen only at $300.

Oil trades above $72, having a strong, bullish momentum; the U.S. dollar gives back post-Fed gains.

Nike stock price declining ahead of the quarterly earnings

Bank of England’s MPC Holds the Bank Base Rate at 0.1%

Bank of England’s MPC Holds the Bank Base Rate at 0.1%

Ethereum is for the rich