Dax index trades back above 15,000 points

Dax index trades back above 15,000 points after the U.S. debt ceiling deal triggered a rally in equity markets. Citigroup and Honeywell investors prepare for the quarterly earnings release.

The trading week started with a bang, as the OPEC+ decided to stick to its plan of raising production levels. As such, the oil prices jump, making a new high for the year. Stock market indices, including the German Dax index, were corrected in the first half of the week, only to recover some of their losses in the following days.

Today is the Non-Farm Payrolls (NFP) day, and nothing else matters for financial market participants. Considering that the U.S. celebrates Columbus Day next Monday, the volatility surrounding today’s post NFP hours is likely to be higher than usual for a Friday.

Stock market indices, therefore, started the week in a bearish mode but recovered after. The main indices in the United States rallied after the U.S. announced that it had reached a deal to raise the debt ceiling until December.

Markets were worried after the U.S. Treasury Secretary Janet Yellen said that the U.S. runs out of money if the debt ceiling is not raised by October 18. Having raised it, the U.S. can tap financial markets again to borrow and finance its deficit.

The decision triggered a relief rally, and the exuberance in the U.S equity markets also transpired in the European markets. At the time of writing this article, the main European indices trade slightly in the red, as U.S. equity futures show the rally stalled ahead of the NFP release later in the trading day.

Oil is back at the highs on the commodities front, threatening to break above $80, while gold and silver remain under pressure.

Finally, the NFP day is here because financial market participants have waited for this release since the Federal Reserve made it clear that a decent jobs report seals the tapering announcement in November.

As such, the markets traded in tight ranges. Clues, so far, point to a more than decent jobs report.

Take the ADP or private payrolls report released two days ago. Not only did the private sector create more jobs than expected, but it also showed some encouraging facts about the U.S. economy. It was not a perfect report, but it signalled that the manufacturing employment is rising, coming out the strongest in one year. It means more factory production, leading to ease on supply chain pressures.

As for today’s NFP, the market expects 490,000 new jobs to have been created in September and the unemployment rate to drop from 5.2% to 5.1% in the previous month. Anything along these lines should give the Fed a green light for the tapering announcement at the upcoming meeting in November.

Employment data is also released in Canada, where 59,500 jobs are expected to be announced for September. As always, when the two job reports are released at the same time, the USD/CAD pair is the most difficult one to trade.

Today’s markets to watch are Dax, Citigroup, and Honeywell. 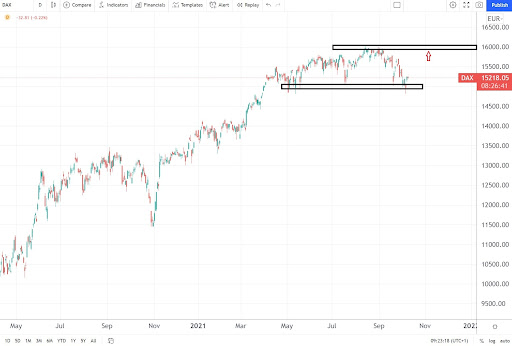 The German Dax index had reached 16,000 points before ten new companies were added in September. Since then, it only corrected, trading below 15,000 until the U.S. debt ceiling deal announcement.

The technical picture reveals a consolidation area between 15,000 and 16,000 points, but the bias remains positive unless the Dax drops below 14,000. A daily close above resistance and a new higher high signals more strength ahead. 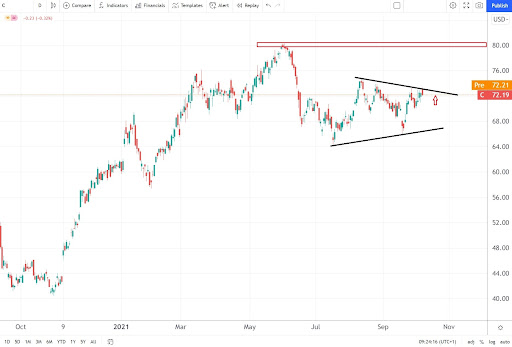 Companies in the financial services industry prepare to report their quarterly earnings, and Citigroup is one of them. The market here appears to have formed a contracting triangle that threatens to break to the upside. A daily close above $76 opens the gates to a run to the $80 area, so bulls may target a new higher high. On the flip side, if the market drops below $64, more weakness is expected in the medium term. 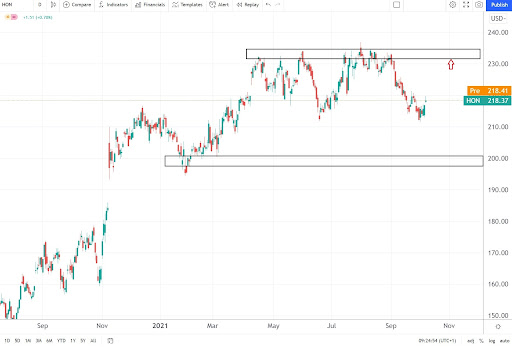 Honeywell is another company that releases its quarterly earnings next week, and the price action here met stiff resistance at $230. The pattern resembles a triple top formation, but unless the market drops below $200, the bias remains bullish as triple tops may easily convert into ascending triangles. Investors may want to wait for either of the two levels to break before trading Honeywell shares. On the upside, the $230 resistance is critical, while on the downside, the $200 round number should offer strong support.

Oil started the trading week on a strong note and remained bid even after the OPEC+ meetings ended. Strong demand from Asia and the upcoming winter in the Northern hemisphere keep energy prices elevated.

Gold remains weak, affected by the rise in yields. The weakness in the precious metals is mind-boggling to investors seeking refuge from higher inflation, as gold acted as an inflation hedge in the past. However, it is not the case this year, when inflation is highest in decades, while gold keeps trading in a tight range with a bearish bias.

Take-Two Interactive should be a $165 stock: Goldman Sachs

‘this is the Holy Grail’

Can Elon Musk arrange financing for his $44 billion takeover of Twitter?

Near Protocol partners with Google Cloud, should you buy it?

‘The president is correct’ that the COVID-19 pandemic is over

Only Bitcoin’s PoW works, Ethereum is doomed after switching to PoS

2
No Result
View All Result