Costco (NYSE: COST) investors prepare for the Q4 FY2021 earnings report to be released on the 23rd of September. The market expects earnings per share of $3.52 for the quarter.

Costco Wholesale Corporation is an international warehouse operator with a presence in countries such as the United States, France, Taiwan, Australia, or China. The company operates around 800 warehouses, out of which 552 were in the United States, as per the company’s data from last October.

Investors get ready for the Q4 FY2021 quarterly earnings scheduled on the 23rd of September. The market expects EPS for the quarter of $3.52, higher by 15.94% compared to the same period last year.

Costco is a dividend-paying company. It has a dividend payout ratio of 29.52% and a dividend yield of 0.69%. The company operates with a gross profit margin of 13.07% trailing 12 months, much smaller than the 34.38% sector median.

Eighty-two analysts monitor Costco, and none of them has issued a sell rating. Most of the analysts have issued buy ratings, while 25 have a neutral opinion about Costco stock price. 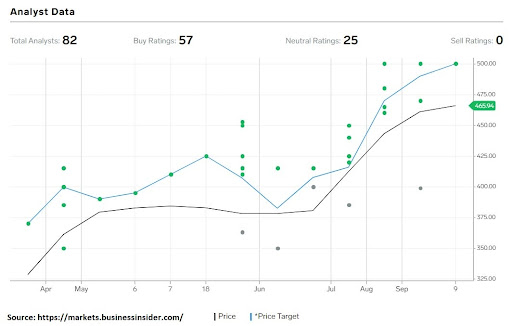 Last week, Morgan Stanley maintained its buy rating for the Costco stock price with a price target of $500. The same did Oppenheimer & Co. and Jefferies & Companies, with price targets of $500, respectively $525 for the stock price.